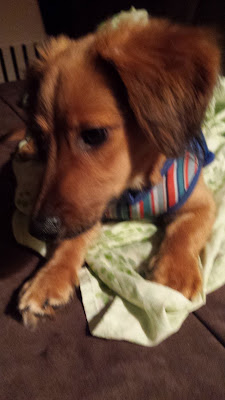 Madison has a new home with us. He is a a long haired Dachshund that is approximately 2 months old. He is a rescue dog that we adopted.

Madison has a lot of energy. Sometimes he will climb up in a chair in my writing studio and keep me company as I write. Sometimes he prefers to take the approach, Writing? I think not. I want to wrestle with you and sharpen my baby teeth on you arm, elbow or whatever I can get my mouth around.

Madison is a kisser and not at all bashful about it. This may be a normal Dachshund trait because over the years we have had two others. Barron and Barry. We lost Barry just this last year. 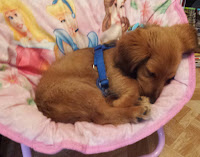 Madison and Silas, our German Shepard rescue dog both seem to agree with each other. So far they play well together.  Right now, his favorite things seem to be eating, licking, and making sure his teeth work.

I predict that he will learn to like poetry, support me in my writing, and enjoy watching San Francisco Giants Baseball with me.
Posted by Michael A. Wells at 9:16 PM No comments:

“How we need another soul to cling to, another body to keep us warm. To rest and trust; to give your soul in confidence: I need this, I need someone to pour myself into.”  -Sylvia Plath

I realize it's Wednesday but let's just pretend for a moment it's Tuesday. I'm not asking you to to relive a work day for a second time, the Monday through Friday stretch is bad enough. Just allow me to back date my Confession Tuesday. Sort of like special dispensation.

Friends, it's been like 5 weeks since my last confession. This It's been a hot wet mess of a 5 weeks. While it's been cooler the past two days, rain remains in the forecast ahead. I confess I at done with it!

In the day before my last confession I very excitedly ordered a book from a small press. I had discovered another really remarkable poetic voice and wanted to read their book. So that's been five weeks ago. Call me spoiled by Amazon two day shipping but I am really bummed out awaiting for the book five weeks later. I'm not going to name the press because I understand that many small presses are understaffed and we need to support these independent presses.  I'n not worried about getting the book. I have communicated with them by e-mail and I understand that is should be shipped this week. Sometimes it is just hard to contain the excitement when you discover another poet you want to read. There are some small presses out there I have had excellent experiences with. White Pine Press, Black Lawrence Press, Two Sylvias Press to name a few. I confess the best way to buy books is at a book table at AWP. You get to walk away with them, and if you are fortunate, you can get them signed. You can start the book before you leave on on the flight home.


There has been an aspect of these past couple of weeks that has been difficult. I mean more so than disappointment over the long wait for a certain book.

We lost a very special dog in our household. Klaus was a struggler and a survivor. He overcame so 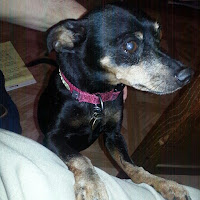 much in the years he was with us, including paralysis.  He was my daily shadow and I miss him. On Saturday I confess that I lost it and broke down in tears. Saturdays I often was the only one here during the day and he stuck to me like glue. I was lost without him.

There are several triggers in the house that tend to make me think of him and I choke up.   It's going to be so hard without him.

“The essential advantage for a poet is not to have a beautiful world with which to deal; it is to be able to see beneath both beauty and ugliness; to see the boredom, and the horror, and the glory.” ~T.S. Eliot
Posted by Michael A. Wells at 8:01 PM No comments: 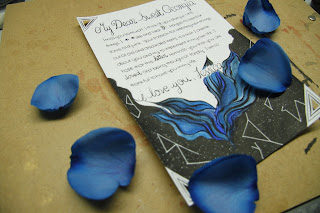 How long has it been since your actually wrote someone in long hand or for that matter received such a letter yourself?  I'm talking about a letter that traveled over some miles to be hand delivered to your address, not pushed through the Internet and popped out into your email inbox.  In other words, snail mail.

This week I read a Forbes article by Maggy Zhang titled From Robots and Emails To Handwritten Letters: Using Tech To Reverse Tech and was intrigued by an art project called Snail Mail My Email. As I have mentioned in one or more blog posts at some point in the past, I believe the demise if the written letter is in fact a negative consequence of modern technology.

To me, hand written letters are an art form. Hell, many youngsters are growing up without any handwriting skill at all. Our communications have progressed to less personal.  They have gone from fast written e-mail letters that arrive in an inbox with standardized fonts to the text message - again instantaneous transmission of 140 characters or less. I'm not saying these things have not had positive values, but they have certainly come as a price as they have all but bastardized written communication.

As I look at my  library of books of poetry poetics, biographies and other collected works on literature, I have a number of books that are archived letters from writers.  Right off the top of my head, I know that I have Letters Home - a compendium letters from Sylvia Plath, written mostly to her mother, Letters of Ted Hughes, The Letters of Allen Ginsberg, and Robert A. Heinlein: Grumbles From The Grave. In addition to these I've read volumes of letters from a number of other poets including Lowell and Sexton. It has always fascinated me the letter exchanges that  have occurred between poets of their time often on their craft but sometimes interesting snapshots of their lives as a whole. These books can provide a picture into the evolution of these poets and poetesses. We can begin to understand the path that has taken them to what they ultimately became. I feel like when I read one I am on an anthropological expedition.  I wonder what we as poets today are losing as a result of this decline interpersonal letter writing.

The Forbes article talks about two different off-shoots of societal divestment of personal writing. One is a company founded not long ago that offers the robotic ability to imitate a customers' signature so that handwritten notes can be generated at a fast speed. Bond is a for profit enterprise and  it's services would be more geared to mass customer correspondence.  The other off-shoot, the one I find most interesting is called Snail Mail My Email.  This was a projected started in 2011 by a gentleman in the advertising business who quit his job. He was tired of the massive amount of impersonal email that landed in his inbox daily. It started that he decided personally he would write more handwritten letters and then came his decision to help others do the same. Snail My Email  has become a volunteer organization of over 700 people who have collectively  written and sent over 23,500 letters around the world. In a nut shell, these people take emails, convert them to personally written notes and mail them to the intended recipient. Perfect strangers writing a letter for someone else to someone else.

I like this idea. But I'm pretty keen on letters.

Posted by Michael A. Wells at 9:43 AM No comments: