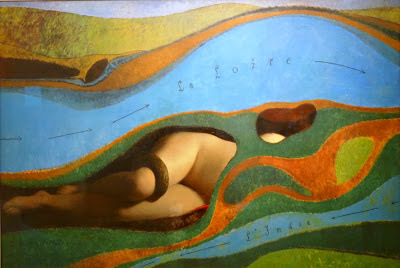 He is one given to meticulous detail,
appreciates boundaries, and topography.

He has an eye for cityscapes, rolling hills-
the arches and clefts.

He sees beauty in the world
where others see the mundane.

Everywhere the lines and curves
converge for him and they come to life.

A rivers path carved out of the land
over time reveals swaying hips.

of breasts and the cleavage that runs between
the rounded tops that softens out into the larger plains.

In the contours of it all he sees her face,
her long white legs and feels her every bit alive.

He believes he is the luckiest man for he sees
his woman is everywhere.

Email ThisBlogThis!Share to TwitterShare to FacebookShare to Pinterest
Labels: The Mag

Beautiful response to the prompt...

Lovely write...I think my new favorite of yours...

LOL, Tess I think you said the same thing for the last one, or maybe the one before.

Or a lucky woman to have a man that sees her beauty everywhere!


Such a flow! Beautiful!!

Such a flow! Beautiful!!

I would love any man to look at me like this! Bravo!

I like this man .. What he sees .. How he sees. I have missed the last several Magpie challenges, nice to see this one.

Wonderful write, and perfect for this photo. I missed doing this one myself, I wish I'd had time.