What Has Happened to America... 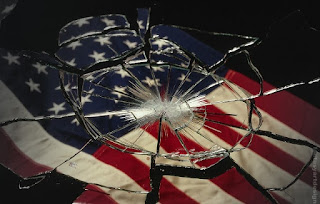 This week something happened that has shaken the very foundation around me and evidently that of countless others.

I have voted in 12 presidential elections in my life time. I've had my share of winning and losing candidates I've experienced disappointment and since there are always winners and losers it stands to reason there always has to be some people who are on a losing side and wake up disappointed; assuming the mad it to bed at all.

It was during my morning drive that it occurred to me that that something major had occurred. Something that left me feeling  like an expatriate; removed from the country I love. The feeling was surreal. Clearly I had only left my home and was driving I-70 to my office. I had gone nowhere beyond my normal daily routine, yet I was in some altered universe. I had not left my country but rather, my country had left me.

You see my country spans across a continent with two great oceans on either side. On the east - stands a monument overlooking  New York City that was a gift of France. It  immortalizes the promise of America to the world.  "Give me your tired, your poor, your huddled masses yearning to breathe free, the wretched refuse of your teeming shore. Send these, the homeless, tempest-tossed to me, I lift my lamp beside the golden door!" - words of Emma Lazarus, a New York poet best known for her poem The New Colossus from which these lines were taken. On the west, the great city of San Francisco whose Golden Gate Bridge is spans across the San Francisco Bay and is another great landmark for those arriving from the Pacific side. But the promise on  Lady Liberty in the New York harbor extends to those arriving from all directions.

And my country not only welcomes persons from other countries, other nationalities, other races, and any religions, it affords these persons who come to this country for a new life, for safety, the protection and freedoms and dignity afforded all of us. By extension, unless we are Native American, we have all made this journey in the past.

But back to my drive...  I know that  as I make this trip, today  and in the weeks ahead a new administration will take shape that has made as the counterpoint of it's campaign promises that threaten to shake the very foundations of what has made this the greatest nation. The role model for the rest of the free world and hope for those oppressed everywhere.

The future in this country is bleak for persons of other nationalities, for Blacks, Latinos, Muslims, Asians. For gays, lesbians, and trans-gendered people. Even women, who are not in the minority are open game for discrimination, sexual assault, and misogyny. The new leadership is not committed to protecting these people and in fact they have real reasons for fear. Already Black churches have been torched. Muslims have been assaulted, or shot and killed walking down the street. Promises of mass deportation and families broken up.  And the hard fought promise to make medical care for millions a reality as opposed to a matter for the privileged teeters on the brink of extinction.

This is not the America I know. This is an America that is broken. The idea the these things will make America great again, flies in the face of Lady Liberty. Perhaps she should be returned to her original benefactor