It's been two weeks, a lot of diet pop and one Mom's Demand Change rally and a GOP Presidential Debate since my last confession.

Yes, while I am not exactly a mom I joined a number of others in Kansas City on Sunday to rally against gun violence. I was not the only male among the group. But I have to tell you there are some very dedicated women in this group. It was very rainy as we assembled on a major boulevard with signs, candles, and resolve. Some of the many drivers honked horns and gave us thumbs up signs, but I confess not everyone was happy. Some fellow came over to us with his closed umbrella in hand - waving it all about in the air and got into the face of a woman next to me. He was belligerent and told us to go to our own neighborhoods. He complained about the honking. I asked him to step back. He said he was a veteran - then added a Vietnam veteran and told the woman and the rest of us to leave. I thanked him for his service and reminded him that we were on a public thoroughfare. The barked at us that he was "public" again getting in the woman's face. I asked him to step back and give her room - he finally went across the street and ripped a sign out of another lady's hands. We stayed on about a half hour and broke up without any further incidents.

Just a short while ago I finished watching the GOP Presidential Debate. I am not bragging, in fact I confess that I feel a little like I sacrificed a bit of my sanity for what I don't know.  I guess being a civic minded person comes with a loss of some brain cells.  A couple of interesting side notes (or not)


Who won? Hell if I know. Bush may have actually landed the best responses throughout the debate.

Trump was largely a buffoon but he has always been that and continues to get support.

The American people were definitely not winners. These are some scary people. Hateful, Reckless, Narrow minded for the most part. They have a poor recollection of history.

There, I have summarized it for you to spare you the madness. If you watched it too, then I feel for you.

Until next time, Good Night, God Bless, and stay sane.
Posted by Michael A. Wells at 10:57 PM No comments: 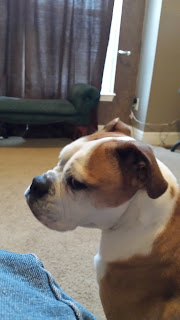 It's been three weeks, one 4 day weekend, numerous days of rain (lost count), one submission packet,  and 4 days of intense reading and writing since my last confession.

Pictured on the right is Tug. Tug is one of my son's three dogs. Because of Thanksgiving, I had a four day weekend last week. During that period I was dog sitting for Tug and two other dogs of my son. This was also a planned writing and reading period and it turned out to be one with positive results. I confess that when I dog sit for my son I almost always commit that time to hanging out with the dogs and reading and writing. I felt I was better disciplined this time and so I came away feeling I made the best of it. I even got a submission packet out in addition to the other writerly stuff I counted on.

Since my last confession I am saddened to report that there have been no less than 12 mass shootings in the past week alone. The numbers of mass shootings for the year are staggering. These don't even account for all the accidental shooting, individual murders and untold numbers of individuals who are wounded by guns but survive. I confess on the issue of reasonable gun restrictions, I will place a lot of weight on this over a lot of other issues during this next election cycle. Change in gun laws are needed. The NRA not only doesn't represent the majority view in America but it has been radicalized to the point that it's directors don't even represent a majority of its members on a lot of issues. The organization has been radicalized under the leadership of Wayne LaPierre.

The senseless loss of lives to guns is one of the biggest thorns in my side presently. It is hard for me to remain calm in the face of the epidemic numbers of shootings and the ignorance and disregard for common sense by legislators who are easily bought out by the NRA.

November has been a big book month for me. Actually I have to confess that this whole year has been. I think I've bought more books this year than any year in my whole past. Attending AWP15 kick started the year off big time as I brought home quite a few books. Since that time I've had a steady stream. Last week I added four new books. There were two others in the last 30 days. A person can't have too many books.... Right?!

I have a doctor's appointment on Thursday and I am counting on a much improved A1C reading of my blood sugar. I confess I need to feel a positive outcome in reducing blood sugar over the last 30 days.

What has happened to this year? It's December. I can't even say it without feeling a disbelief. I'm thinking about New Years Resolutions. Ugh!

That's it for this week.
Posted by Michael A. Wells at 9:06 PM No comments: