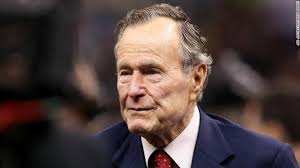 This is not intended to be political as much as it is hearkening back to a simpler time. A time when there was a simpler discourse among leaders and even though the bitter battles of politics were waged, in the end, differences aside, these were people who lead this country with an unquestionable dedication the country they believed in and wanted most of all for it to succeed.

To me, the passing of President George H.W.Bush brings with it a double sadness. First, the loss of a fellow American, whose service to this nation was long, and varied. I am also feeling a stark contrast in the present and earlier times.

To be sure, George H.W. Bush and I differed widely, both on domestic policy and foreign affairs. At the time of his election, I was serving as Chairman of the Jackson County Democratic Party (metropolitan Kansas City MO) and while the Democrats did not carry Missouri for our candidate, Jackson County did by the biggest margin for a Democrat up to that point, since John F. Kennedy.

Looking back on 41, I can say without a doubt that he believed strongly in America and his pat may have been different from what I hoped for, in the end, he cared about this nation. He cared about our allies in Europe and around the world. And his transfer of power was orderly and supportive even if he might have charted a different course. Dear Bill," George H.W. Bush scribbled Jan. 20, 1993, to the Democrat about to succeed him as president. "When I walked into this office just now I felt the same sense of wonder and respect that I felt four years ago. I know you will feel that, too. The full text of the letter can be found at the link above. This note was part of a ritual of the outgoing President leaving a note to his successor in the top left drawer of the "Resolute Desk" in the Oval Office.

Somehow, this all seems more complicated. America's reputation abroad is very low. In some places, perhaps the lowest of modern times. Our friends around the world are uncertain what we stand for. Indeed, many Americans seem to no longer embrace longstanding principals upon which this nation was founded.

When issues of colluding with foreign nations that differ with the U.S. on a number of pressing issues are front and center. When it is questionable if the President cares more about his investment opportunities then what is in the best interest of the nation, the concept of ethical government has become non-existent, can we be assured that President does, in fact, have a central dedication to American Democracy? What kind of letter might the next president find in his drawer?

Posted by Michael A. Wells at 1:53 PM No comments: