It has been six days since my last confession.   Hurry along to the confessional and let's get started.

I confess this has been a hard week. It's been a week with a lot of demands and I have tried to remain true to them. From school and school work to writing, to try to help another, but alas I have realized I am not magical or all-powerful. I am human and I have had limited success. Further, I am disappointed in my overall results. This is a self-disappointment, plain and simple.

Tonight, I listen to the news and am admittedly. angry.  The Secret Service says they deleted text messages on Jan 5 and 6, 2021.  This is only the most significant two days in recent American history.  Plus their story has changed over and over.  All agents working those two days need to sit and testify under oath before the Jan 6 Committee.

I'm happy to say that it seems my month of Grind poems has been going better this month. I confess it should be automatic by now.

There are at least one, maybe two poetry books coming out that I must have. They need to be worked into my anaemic budget.

Yes, raising my hand, I confess I am eating Sweet Cherry Peppers....  for dinner?  Maybe.

Let me leave you with these words by Yeats... "For the saint and the poet alike... make excess even more excessive."

Posted by Michael A. Wells at 9:00 PM No comments: 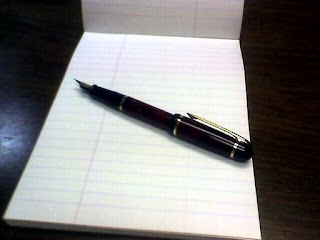 To continue my series on journaling I wanted to give you a bit of a flavor for things a writer might journal about. This of course could be an exhaustive topic, but I am going to provide you with just a small example of what a normal day of journaling might be like.

Of course, if I were working on a special project I might want to focus on that, but this will be an example of just a random day...

I Will Call This Journal Bits

Posted by Michael A. Wells at 8:42 PM No comments:

I confess that I am late. This would not be the first time you have heard this from me and I'm sure it won't be the last.  Last night when I arrived home from class, I had to finish my Grind poem and a couple other essential obligations and the clock just would not let me do this, so here I am tonight. 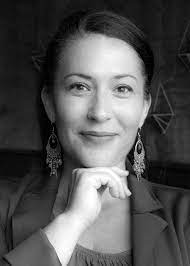 I confess I will lead off with good news tonight.  Ada Limón was named our new Poet Laureate of the United States.  A very deserving choice. I had the occasion the meet Ada once at a reading in Lawrence, Kansas. One of my favorite poems of her's at the time was Sharks in the River.  Not one of her best pieces but a fun one never less.   Her 2015 book Bright Dead Things seemed to be a turning point in her work and I knew that there would be bright days ahead for her and her poetry.

Ada deserves this, but what's more, America will be enriched by a greater awareness of her poetry.

Today was a rough day at the office and I admit I am tired. But here I am confessing to you that life after work goes on.

I am also happy to report that I am feeling happier than not about school. It is a big change to my evenings, but I feel so far that I've been doing what I need to and that is a good feeling.

I confess I am ready any day now for an acceptance letter or two or three. Come on, I'm overdue.

I am a little disappointed in my Giants. They have gone through a rough patch. Mid-season and they need to turn themselves around.

My Essay on Plato is due in two weeks. It's coming along. I may take a break from it tonight.

I confess I believe in miracles.

My overall mood today is best described as tired and reserved.  Not a bad mood but could improve. I'm not complaining, just hoping for some good news.

Until next time, stay safe, and may happiness find you.

Posted by Michael A. Wells at 7:45 PM No comments: 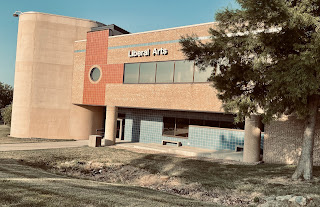 Dear Reader:
It has been 13 days since my last confession. I have a lot to make up for, so follow me to the Confessional, please.
If it's Tuesday it should be class night. Instead of class, I had a conference with my professor. Not a conference like I did something bad, but I'm sure somewhere along the line I have, but a conference to go over my big project of the semester. My last essay.
I arrived slightly early as I confess I was nervous and sort of felt lost. Not. in the building pictured above right, there is not that much to get lost in there. No, I was lost in what I was doing there.  Yes, I had a vague idea. I was supposed to go over where I was at on the project. He asked me to refresh his mind on what I was doing in general terms.
Plato - in his view can one be happy in life without eros?  In general, Plato seems to rank beauty and love very high in his order of life. I'm certain that Plato would not like one to speak in general terms, nor does he like sensibility. The ladder seems to defy making any sense.
I won't write the essay here, I hope to only do it once, but my professor was almost giddy over the things I brought up, both in observations of Plato and Socrates and some of the questions I will raise concerning the application of Plato's theories in today's world.
I walked out of the classroom feeling. happy that I was apparently on the right track.
So, the building above is the Liberal Arts building on the Longview Campus. I confess that my mind got the best of me and was thinking if I were going to Liberty University back in Virginia, would my class be in the Conservative Arts building instead.  The University was I believe founded by the late Jerry Falwell, which should tell you a lot about it.  (insert laugh here)
I confess today was a bag of mixed goods. There were some good things about my day and some things that were just so-so. A little in the feeling down mode, but overall, it was a decent day I guess.
I confess I am extremely tired of shootings. More people are growing angry at the gun violence in this nation. They are not shy above their anger either. The problem is accelerating. More guns in the community are not the answer. It's like throwing gas on a fire.
I confess that I have been trying to practice calm more often. I'm getting better at it, not perfect but with some prompting, I have made headway.
I confess that I am so happy for Silas that he got his cone off this weekend.  Poor baby is recovering from a torn ACL.
Still cranking out poetry submissions. Still waiting for some journals I really want in. I confess is have a list of them I keep in my head.
That's it for today's confession  - Until next time - be safe and enjoy life.
Posted by Michael A. Wells at 10:08 PM No comments: 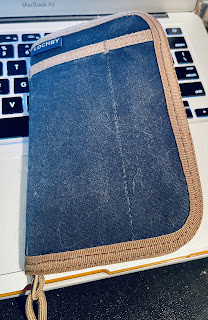 In my first post, I talked about  Lochby journals.  This is my newest baby - The Pocket Journal in - Blue.  I selected this with a gift card for father's day and different from the regular field journal in size and capacity.
Obviously much smaller, it will accommodate only two refills at a time. The Dot Matrics, Ruled, and Unruled paper is available. They do not make a calender for this size.
WHAT DO I USE MY JOURNALS FOR?
The larger one shown here is my calendar and my journal and writing catch-all.
That includes:
That is what my larger journal is for.  The smaller one is in an experimental stage presently.
I think it will get carried around a lot and will be used for ideas or catchphrases I want to be able to recall.  Things that later may find their way into my writing,
What I am sharing with you is how I operate. There is no right or wrong way to use these tools.  Just as there is no right or wrong way to approach journaling.  But that is part #3,
and you will have to come back for that post.
Posted by Michael A. Wells at 6:07 PM No comments: 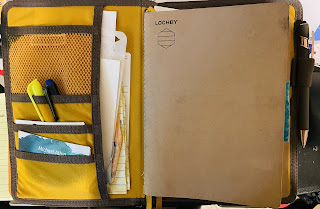 If you know me, you surely are aware that I have been journalling for a number of years. Personally, I'm not able to understand what writer can possibly get by without it.

One of my daughters turned me on to the Lochby brand journals. This rugged-looking  Waxed Canvass Journal sheds water and will accommodate up to six inserts.  Calendar, ruled paper, unruled pages, and dot matrix paper. 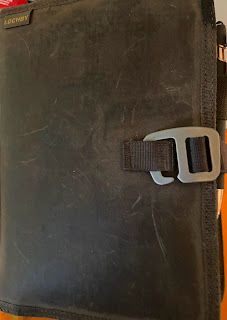 The paper is quality stuff. At times I write with a fountain pen and the link lays down superbly and does not bleed through.
Pictured here is the brown Journal. I also have a roll-up pen/utility EDC kit. It allows me to carry a variety of writing instruments and have them always handy.  I will feature the roll-up in a separate post.
I also acquired just this week the Pocket Journal. Smaller and holds only two inserts. The same inserts minus the calendar are available for this. I will unveil this item in my next post.
Over the years I have used a variety of journals.  I have a couple of nice leather-bound journal holders.  I also have bullet journaled for maybe 3 or more years now. That is a whole different practice but would certainly work with one of these journals as well.
I will talk about all of these things in upcoming posts.
The whole line of Lochby products can be found here  LOCHBY
Posted by Michael A. Wells at 8:19 PM No comments: