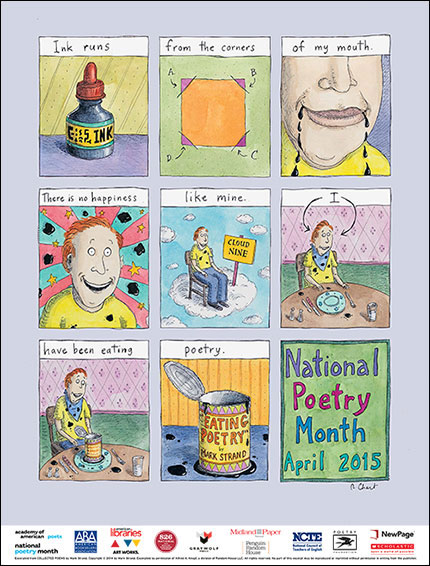 I love what they have done for the NPM poster this year, don't you?
Posted by Michael A. Wells at 1:02 PM No comments:

The weather was decent today and I walked to Target as one of my daughters has borrowed our car. It was a chance to get some sunshine as I did some #amwriting.

Late afternoon, instead of doing my Saturday Submission (I will make it up tomorrow) I chose to watch the first episode of the mini-series Dr. Zhivago. I can't remember how long ago it was that I saw the original move made in 1965 staring Omar Sharif, Julie Christie, Geraldine Chaplin  and Rod Steiger.
The story is coming back to me, I would like to see the original again. My wife and I saw it and I don't recall if it was while we were dating or after we married but in any event  it would have been earl to mid 1970's.

It was kind of nice to get lost in something on TV that was not a sit-com, reality show, or our normal variety of television. A little like getting lost in a book but a little less mentally involved.

The tree on the left probably seems a little random. It's a tree that I passed on my walk. In my "poet observer mode" I shot a couple of photos just for the heck of it. Nothing majorly significant but I did like the contrast in the shadow of the closest main branch off the trunk. I wondered to myself what it might look like if I had a camera set up on a tripod that remained in the same location and over an 8 hour period shot a picture of the tree once each hour. It would be interesting to see how this contrasting light and shadow might change.

Tonight it's a little colder and we've had some precipitation that started. It's 57 degrees and I don't think the temperature is supposed to drop much more overnight so I'm not expecting a freeze.
Silas when out briefly and it was barely misting and he came in with his coat pretty wet. His fur is so thick that it pretty much beads up on the top layer of hair and never really penetrates deep into the fir. He appears to be down for the night now and looking at the time I should be too.

Finished up the pages of one of my journals and started a new one by quoting a inspiring few lines from a poem by another poet. Words that are constant reminders what it means to practice an art. In my case, poetry.
Posted by Michael A. Wells at 10:59 PM No comments:

Confession Tuesday - What a difference a week makes

It's been a week since my last confession. A week of cold days and beautiful days. A short work week and a long weekend.

I confess that I easily get spoiled when I have a Monday holiday tacked on a weekend. I also tend to be confused about the day during the rest of the work week.

When I came to you last week I expressed a variety of emotions but one was a disappointment I did not go into details but it centered on not hearing that I made cut in a program that I was exceptionally excited about. I was under the impression that the deadline for notification had come and passed I since I heard nothing I assumed I was out of the running.  Yes, I confess that I moped about it  a bit but decided that  it was a real long shot and quickly  got over it. I chose to consider it just one of those down sides to life that would be counter balanced by something good. And as I also mentioned last week something did happen that I expressly felt blessed by.

Skip forward to today. What a difference a week can make, because this afternoon I opened my email and nearly fell off my chair because there in my email was a new arrival that in fact was the news I was looking for a week ago. I had not been passed over.

I confess I was so totally taken by surprise and excited and this has sort of overshadowed everything since my last confession.
Posted by Michael A. Wells at 10:27 PM No comments:

Sometimes I don't quite know where to start on Confession Tuesday. Life can be funny. You can go through a week and think back and nothing or everything jumps out at you. Sometimes you don't know what on earth you are going to confess and sometimes there are so many places you can go you don't know what to whittle it down to. This week is neither of those.

As I look at this past week there are three places that I need to go with this confession. I will work sort of in reverse order of the magnitude of these .

On Saturday I turned  #@. I confess that I always meet my birthdays with a mixtd perspective. I'm not especially enamored by being a year older yet I am happy to be here given the alternative. Age has always been difficult to me.  I did have a wonderful dinner with part of my family that was available. We dined at the Olive Garden. Among those present was Harper. I confess that Harper brings so much joy to life. She is my granddaughter and she is so stinking cute that I'm certain it cannot be legal. She is going to be a talker. At just under three months old she can jabber up a storm. My daughter tagged me with a Happy Birthday video of her on Facebook. I've listened to it so many times It could seem like it went viral. So, altogether my birthday was a plus. I am grateful  to be alive and - life is good!

It would however not be a life without disappointments. They are after all the valley by which we measure the elevation of the mountains. I was disappointed this past week by something related to my writing that did not happen. Details aren't important. What is important is that like everyone else who ever pursues something - you sometimes have hopes that  do not fully address reasonable expectations. I'm accustomed to rejection letters and they rarely phase me. But this was something the left me feeling down on Friday - the day before my birthday. I am reconciled with the matter now. I know more about the situation to understand the long odds of the program.  I view this disappointment and greater understanding as a blessing- something I would never have said on Friday.

The last of this week's confessions is more tricky. It starts at a place unlike the previous with absolutely no expectation. As it turns out I was the beneficiary of very generous gift. It came from a family member who said they were led to do what they did by the Holy Spirit. Again, the details of the gift are not the story here, the story is that this came from out of nowhere. My first reaction was oh hell no, It's not something I feel deserving of. It's a significant sacrifice. But I in no way question that this person prayed about this and feels strongly about being moved by the Holy Spirit in this direction. As uncomfortable as this makes me on one hand, it is undeniably a blessing. How can one argue with the Holy Spirit and the love of the giver.

I have laid out before you three confessions. Through it all this week has been a week of blessings.
I'm thankful for the life I have, the people in it, and these blessings. I look forward to what is ahead...