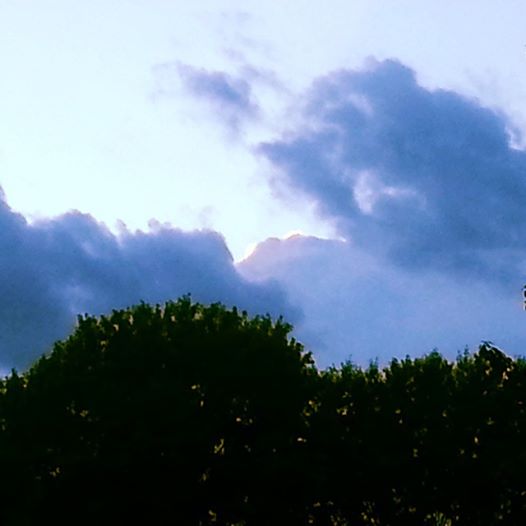 Something is coming.
Over the hill.
Through the dark
green nomenclature.

The ambiance shifting.
A quiet calm.
Then air stirs
right through us. 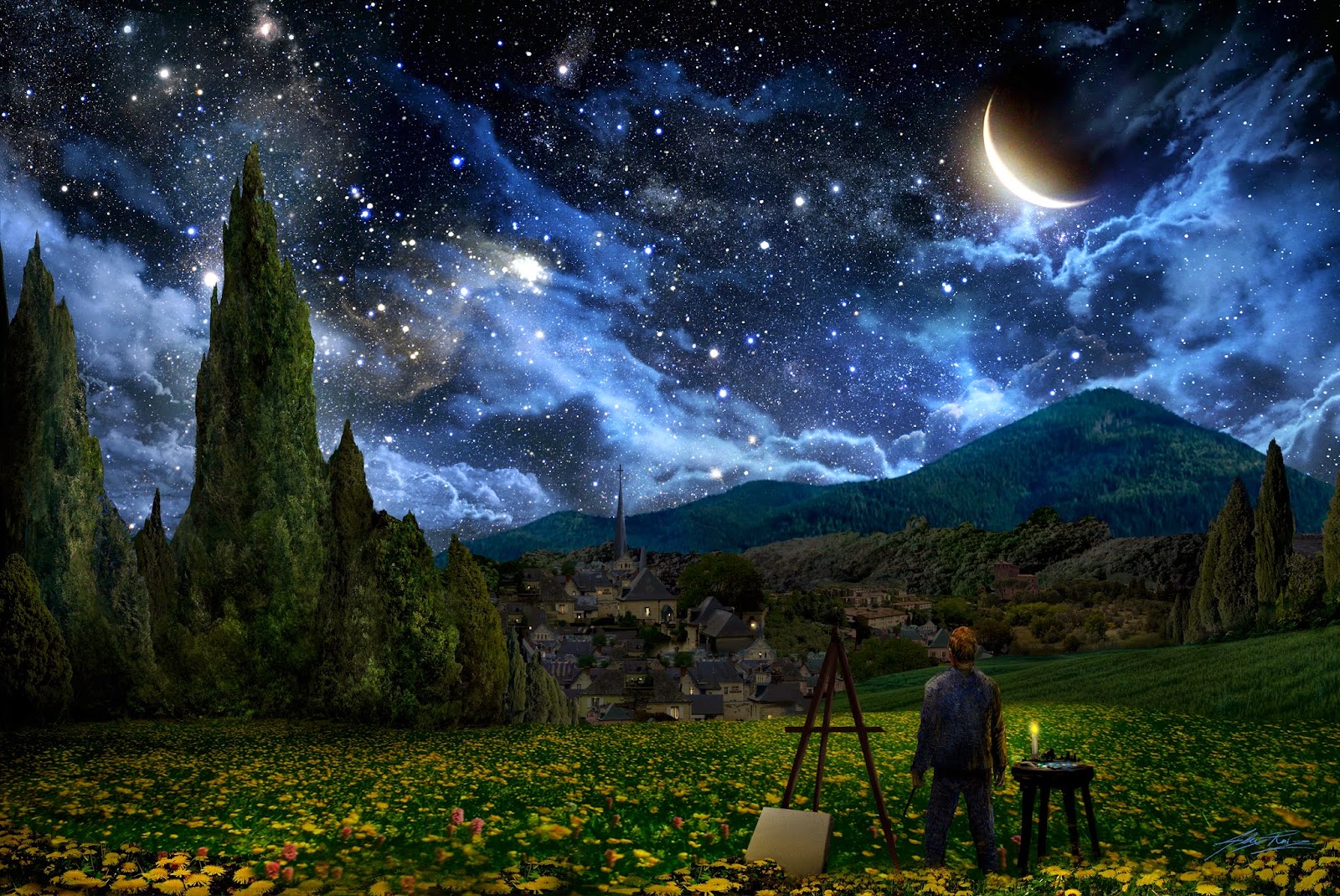 Where have I hid from the wonders.
All above me the night is Calypso.
I am Odysseus transfigured.

I, Odysseus am caught by this night,
by each star's twinkle; jewels
of adornment in your blue hair

flowing all about the shoulders
of the earth. I am awestruck.
I the captured cannot

capture you on canvass.
My paints, my brushes
are unworthy of such beauty.

Posted by Michael A. Wells at 9:04 AM No comments: 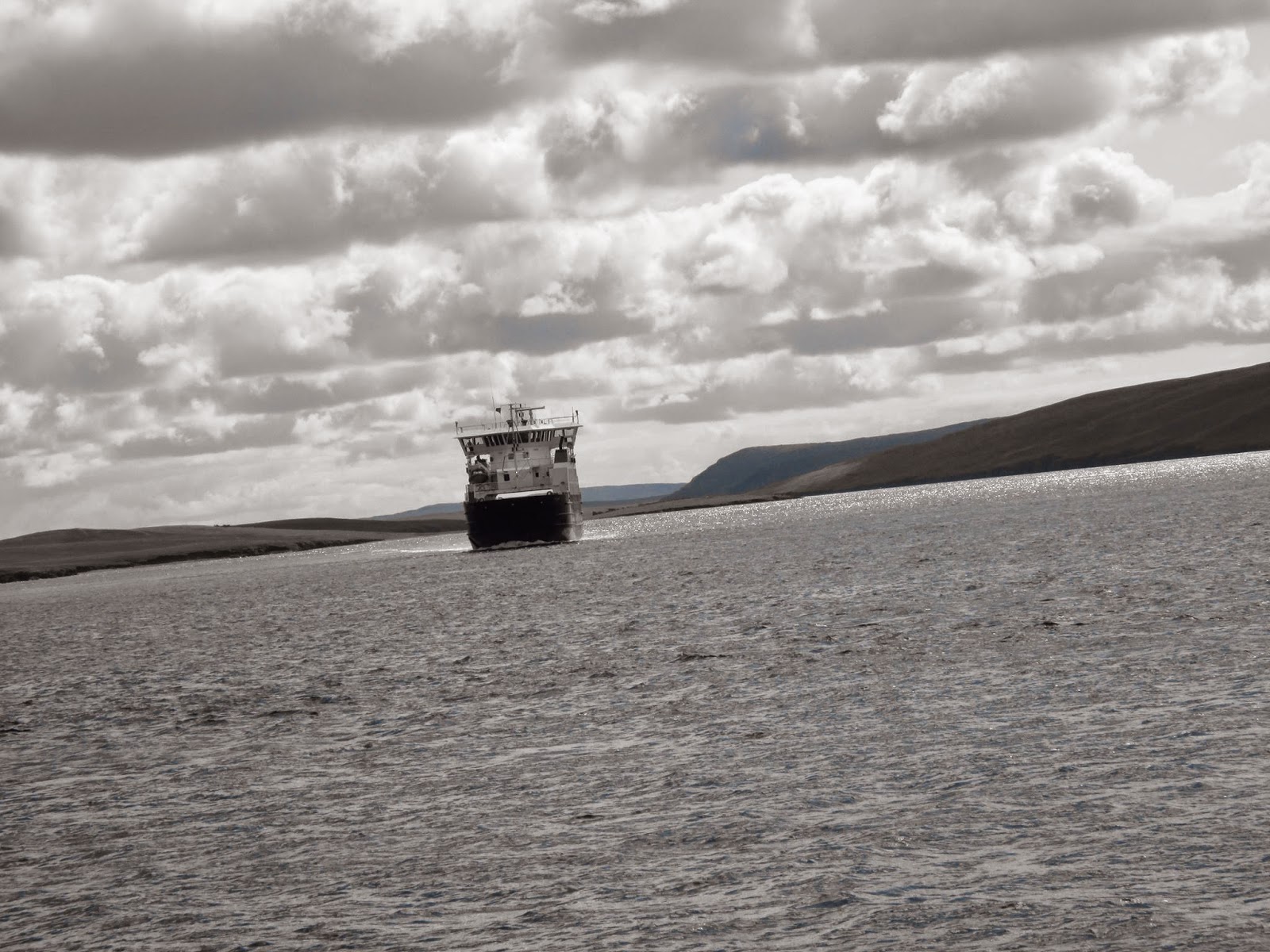 Overhead the sky is an accordion
as we make way on gentle waves
like a slow dance sashaying
side to side and watch the shoreline
grow thinner like it is starving
for our return...

Posted by Michael A. Wells at 5:25 PM No comments:

Email ThisBlogThis!Share to TwitterShare to FacebookShare to Pinterest
Labels: The Mag

Barry - a long-hared Dachshund, became a part of our family in 2003. He was just a stinking cute pup that you could hold in two cupped hands.

He was a beautiful redhead - his parents were both long-haired AKA registered Dachshunds, one also red and the other cream colored. 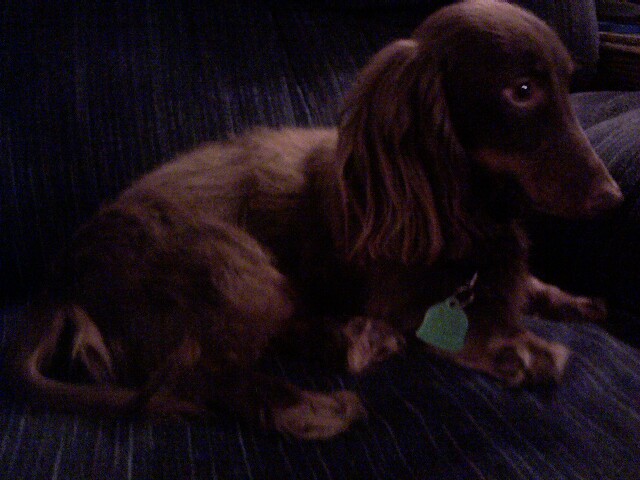 Barry learned at a very early age to offer his hand to shake at the snap of my fingers. He became so proficient at it he would later often come to me and offer it on his own. He especially liked to come ou on the bed beside me when I was putting on shoes and socks in the morning and initiate the hand shake ritual - perpetually offering it even as I had already shaken it. I think he must have believed he could keep me from leaving for work by doing so. 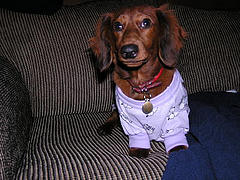 To the left is a younger Barry in Jammies.  He really did not like clothing on - I don't recall how we managed to get this picture. I look at his face on this picture and I can almost hear him saying, "this shit ain't funny."

He slept in our bed at night - sometimes sleeping on top of the blanket between my wife's extended legs. At other times, especially towards morning would come over an burrow under the blanket next to me or if I was on my side he would sometimes sleep resting his front paws and his head on top of my legs,.

If one of us was home sick in bed, he always would come and lay with is as if he was obligated to make sure we were ok. He was a great caretaker.  Below he is seen napping with Mo. 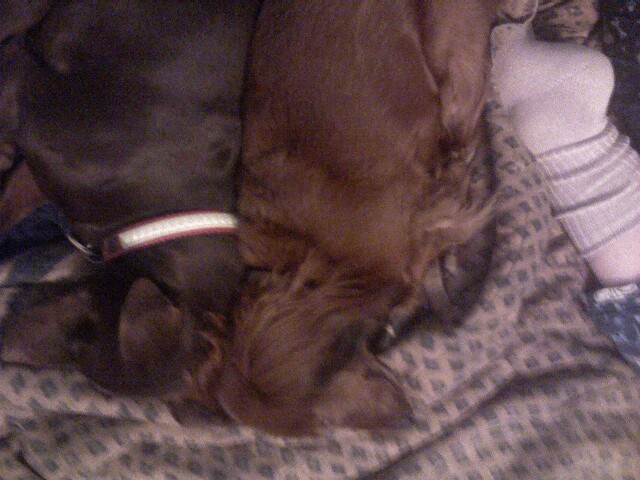 From time to time he would come and sit in my writing studio as I worked. But when I came home from my day job he was always hyper-jubilant and could not wait for me to acknowledge that I knew he was at my feet.

In winter, Barry would move through snow by sort of hopping with his little legs over the white stiff as opposed to walking through it.  The sight reminded me of bunny hops. 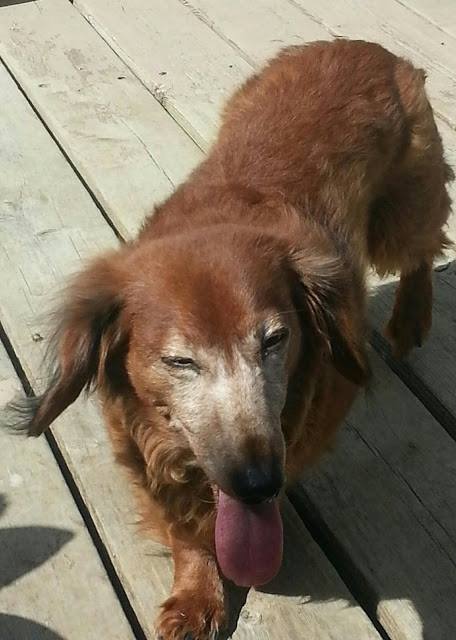 As seen above, with age, Barry would trade some of his red face hair for a cream  or whiter hair.  During the past year he was failing in health - losing weight badly  and we discovered that he had developed Exocraine Pancreatic Insufficiency.  This was a life threatening condition but with an enzyme additive to everything he ate it was manageable. This however resulted in something that would break my heart routinely and the other dogs would get treats he would not be able to. He ate canned food that required to sit with the enzymes while they cultured in the dog foot before feeding.

Thursday evening - he simply crawled into a kennel in my writing studio where normally Silas would sleep or be crated when necessary. That is where he passed away.

Berry was survived by two adoptive brothers Klaus and more recently adopted Silas.  He joins Mo another brothers who passed away this past year.

There is a tremendous hole left in my heart.
Posted by Michael A. Wells at 10:53 AM No comments: