Confession Tuesday - I Have My Two Buddies Edition 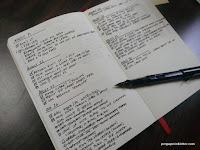 Won't you come with me to the confessional.....

Reader, it's been one Chiropractic visit with Trigger Points, one visit to mom's, one documentary movie, one dinner out with my sweetie, one meeting of K.C. Metro Verse, two Power Ball tickets, two new poetry drafts, one vacation day and one trash day since my last confession.

After a brief shower, I believe there has been a break in the rain and I probably should run these two dogs out to do their business for the night.

Until next time, live in the now, and be safe!
Posted by Michael A. Wells at 9:22 PM