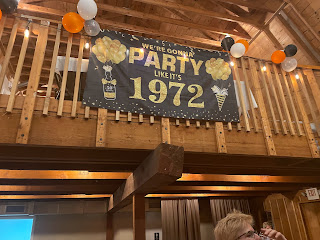 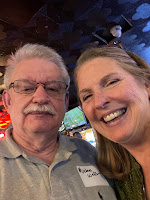 Well friends, another Confession Tuesday.  This one covers my 50th High School Reunion. Friday, Saturday and Sunday classmates from the 1972 Southwest High School gathered and celebrated the high 50.
I had not attended any of my other reunions and there is a story or two behind that, but that is for another day.  Admittedly, I was a bit nervous coming into this whole thing.  On the right, I am joined in this photo with Paula Lyon. Paula was another band member in our class.  Paula was busy Friday night at Charlie Hoopers sticking name tags on us as we showed up to kick off the weekend. A big thank you to her for making me feel at home and like this was maybe going to be okay after all. Robin Scott was another who made me feel right at home and wanted to know if I was going to be at the next day's event. 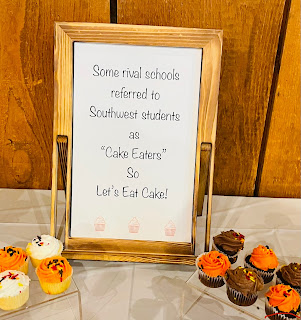 Southwest High in those days was the premier public High School in the School District. Our School was located on Wornall Rd. just south of the 63rd & Brookside area.
Rival Schools referred to us as the "Cake Eaters"
Below right are a couple of the many. students that worked hard to make this event memorable and enjoyable. 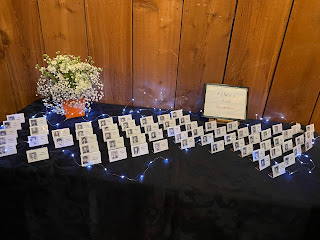 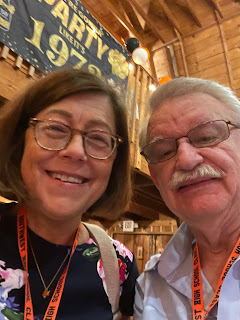 Above was a memorial table for all the students that are no longer with us. Sadly that number is presently 67.  They are
missed but not forgotten.
To the right, I am in a selfie with Elizabeth Wall.  This was definitely the biggest surprise and will be the most memorable part of the Reunion.  At one point Elizabeth (who told me she had been asking around if anyone knew if I was there and someone pointed out where I was.  She came and pulled up a chair next to me and said, "I don't know if you remember me, but we dated in High School" The answer was - Of Course!  I recounted where the apartment was that she lived in, etc. We talked a bit longer about mostly what I had been up to, and it was quite loud and I wish before we parted I had asked about what was going on in her life.
I confess, I often have wondered how many if even any classmates ever think about me and wonder what has happened to me over the years.  Elizabeth answered that at least one had,  I did acknowledge wondering about her from time to time. 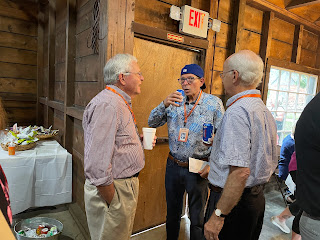 Here are a couple more shots.
I have posted a lot more on Facebook in a SW High Class of 72 group.
The food was good, Music was awesome, (Those were some pretty good years for music.) 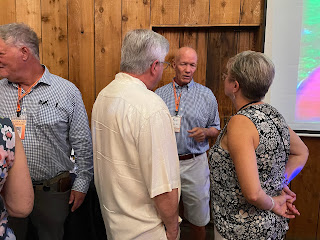 There were quite a few that did not age much or at least aged very well.

I must confess it was something I will forever be happy that I attended. Wish I had been at others, but this one definitely rocked.