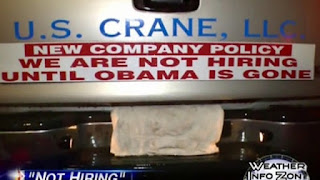 U. S. Crane, LLC is a company with it's Corporate Headquarters in Waco, Georgia. It's principal business is Overhead Crane and Hoist Sales as well as replacement parts and Structural and Electrical Engineering for such products.   They recently made the news because the have promoted their stated company policy on bumper stickers which they have placed on the fleet of vehicles which the company operates in for their business.
As seen at the right, the bumper stickers read:  NEW COMPANY POLICY - WE ARE NOT HIRING UNTIL OBAMA IS GONE.  I don't know about you but I've never worked for a business in my entire life who put company policy on bumper stickers. In Human Resource memos, in Company Handbooks, but never as bumper stickers on vehicles.  Of course the use of bumper stickers for political discourse is widespread and time honored.  That is what really is the heart of the matter here with U.S. Crane.

Bill Looman, the owner of U. S. Crane would have you believe that he is just an American Patriot trying his best to save our economy from the President.  He has indicated that he wants to hire everybody but just can't afford to because of Obama's policies.  But Looman's motives actually go beyond the scope of any policies.

In a Facebook post-  Monday, August 8, 2011 at 5:30am, Bill Lomman, III says of President Obama, "HE HAS BEEN TRAINED FOR THIS AND HE IS A MARXIST/ISLAMIC TOOL TO TEAR APART OUR ONCE GREAT NATION."

My question is, after reading this, do any of you think this sounds like an individual who is especially
focused on his business operations and development of company policy?  It appears that so much more going on here some business' Human Resources policies on hiring. Sadly there are people who continue to drape themselves in the flag and religion to mainstream their ideological hate - and attempt perpetuate it and grow that hate.
Posted by Michael A. Wells at 11:00 AM