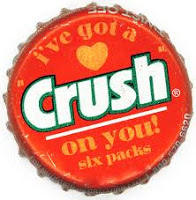 In 2011 I decided to compile a list of poets that were at the time prime on my list people doing excitable work. I believe that first year I had a list of 10 such poets. Six of the ten were poets I had heard read in person. Eight of them I owned books they had written. But all of these poets were people that  I would from time to time revisit their work.

Each year since then, (except 2014) I have revisited the poets that were getting my attention. Over the years there have been numerous that  were close to making my list but last year last year I shortened the list from 10 to a Crush List Six Pack. Of course that  doesn't make the decision easier, but perhaps the choices more significant.

There are some that have been held over from year to year and with good reason.  Kelli Russell Agodon  is an example of a repeat for several years Her writing  and energy has been especially inspiring and I have three of her books each of which I revisit from time to time and her most recent one, quite often.  You can see the 2015 list linked here.

And so, now I give you my 2016 Poetry Crush List. Again, a Six-Pack. And there are in not particular order of significance.

1. Marie Howe - author of three poetry books the most recent The Kingdom of Ordinary Time, a book that I have read and found a great deal of kinship with. Howe grew up in a Catholic family and Catholicism culturally informs her work. I read a number of interviews of her and was enthralled with her interview by Krista Tippett on the podcast On Being. I've noted with interest books that have won contests judged by Ms. Howe, It seems that  I generally  enjoy the same kinds of writing that  she finds worthwhile.

2. Richard Siken - author of  Crush and War of the Foxes. I've read both of these books. Crush I felt was the bolder of the two but  War of the Foxes has it's points.  Siken impresses me because he can deal well with the abstract and I'd like to feel I could write with courage that his work exudes. Ah, maybe someday...

3. Rachel Mennies - author of The Glad Hand of God Points Backward. Much the same way I am intrigued by the Catholic culture that  can be found in  Marie Howe's The Kingdom of Ordinary Time, I am fascinated at the impact of Judaism in Rachel's book. Perhaps even more that  Howe, she has woven this deeply into this collection of poems. Jewish culture is less familiar to me, but I find it's imprint on her work appealing. That said, I've read a number of her poems aside from the book and have enjoyed the versatility she demonstrates. Some examples:


As an interesting sidelight, I discovered Rachel by way of an advertisement in the Writer's Chronicle. They had a full page ad with her picture saying that she was one of the volunteer mentors that participated in the AWP's relatively new mentor-ship program. I had applied for the program but was not accepted that  round. When I saw the ad however, I googled her  to find out more about her  work out of curiosity to see what kind of experience such a volunteer might bring to  the AWP program. Needless to say I was impressed with what I saw, realizing  someone surely had a most positive mentoring experience. And me, I found another  really  cool poet and that isn't  half bad.

4. Shaindel Beers - author of two poetry collections - The Children's War and A Brief History of Time. I've had the opportunity to read both of these books. Children's War was an impressive project and a read that will touch you in a very raw way. History of Time is both simple and eloquent in it's frankness.  I've observed recently that  Ms. Beers has been having a hayday with new work croppping up all over the place. An energy you have to admire of any poet. Maybe, just maybe I can learn something from her work ethic.

5. Michael Schmeltzer - author of Elegy/Elk River and Blood Song.  I read both of these books this year and I couldn't put either down till I finished. Schmeltzer collections are both very lyrical and gripping. Blood Song was published by Two Sylvias Press (an Agodon connection) and this was a super sweet book for them to have a part in. Looking forward to more from Schmeltzer.

6. Suzanne Frischkorn - author of Lit Windowpane, Girl on a Bridge and Red Paper Flower. Of these, I have read Red Paper Flower. This book was funny and hard hitting at the same time. I desperately wanted to read more when I finished. I'm assuming  Girl on a Bridge is also out of print. On Amazon you can find copies priced between $146 and $374. Ouch. But seriously I keep hopeful that we will see some more work from poet soon. Real soon!  UPDATED NOTE: Jan. 2017 - I have been informed by Suzanne that  Lit Windowpane and Girl on a Bridge at Main Street Rag Online Bookstore. I have added the links in the titles in the original post. I will be ordering these myself.