The Trump Sonnets by Ken Waldman 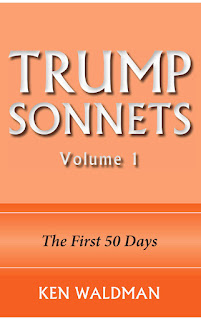 Ken Waldman like most of us was taken by surprise when Donald Trump won the electoral votes necessary to secure his election as president.

We all know that the president-elect wasted no time tweeting to the U.S. and beyond. The results could be described any number of ways but suffice to say they are not positive.

Ken began writing sonnets based on what Trump was saying.  He has published Trump Sonnets Volume 1, a collection of 41 in the voice of Donald Trump and 28 others that are directed to him.

Ken is no novice at this, He previously wrote  As The World Burns: The Sonnets of George W. Bush.  In this book the poet climbs into the head of the President and from that vantage point writes sonnets.

Both of these book were published by Ridgeway Press and the books can be purchased from SMALL PRESS DISTRIBUTION  or of course at Amazon.com

Note:  I have not read As The World Burns but I have read Trump Sonnets Volume 1. I understand he is working on a follow up Volume 2. If you have the heart for political discourse in these remarkably unorthodox times, you will enjoy Trump Sonnets.


* Ken is currently my mentor in the AWP Writer 2 Writer program.
Posted by Michael A. Wells at 9:29 PM