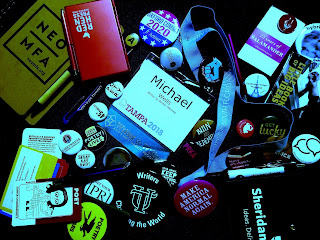 It's Wednesday morning and I will be headed into the convention center later this morning.
I crashed so hard last night that I forgot to take my insulin. It's no big deal because I woke up with a blood sugar of 85 this morning.

The flight was smooth - just a tiny amount of turbulence. Full plane and my wife and I could not sit together. She directed me to an open aisle seat and said she'd go back further. I guess you could say she picked out the seat for me and she did a good job.

There was a young woman in the middle seat with a small child on her lap and a carrier in the window seat for the said child.  A few pleasantries. And settled in. Somewhere over flyover country
I asked if she was from Portland. She indicated no, she was going to a conference. AWP? Yes!  That's where I am headed. (I mean as big as AWP is - where would they put another conference in the city at the same time.  I inquired as to her genre and she said poetry. This was the best random seating pick ever!  Her son was adorable and quite well behaved for his 6 months old and cutting first teeth.  After we landed I gave her my card and said, "I'm Michael." She said her name and we wished each a great conference. I 've mad a new contract in my own genre and haven't even landed in Portland.

Above you will see a small assemblage of swag  I picked up at either Washington D.C.  or Tampa conference. Swag is one of the fun parts of the conference - to see who brings what. Today, I'm wondering, "who's got the swag? This will be the subject of a future post.

Time to go shower and dress. I will be heading up to midday. I have several hours of volunteer work and them tonight I will go to the  Braver Together Gayla with Cheryl Strayed.

Thursday is when everyone gets crazy.
Posted by Michael A. Wells at 10:54 AM