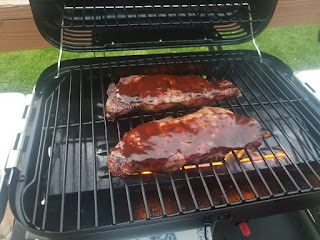 It has been two home grilled stakes, one fixed flat tire, a new draft poem, one book review written, another book finished, the riding lawnmower fired up for the first time of spring, two Giants win and four losses, one dream with a visit by a poet, a not so good week at weight watchers, a family Easter gathering and one week since my last confession.


I confess I almost forgot how good home grilled steak can be.

I had a slow leak in a tire that I have filled up several times over the last couple of weeks. I bought a portable tire inflator - but also took the car back to the tire store and they found a nail in it and fixed it. Since I have the inflator I probably won't need it anytime soon. That's what happened with buying a snow plow this winter after several heavy snows. We bought and used it on the last big one and then they all stopped.

I confess I am feeling a little down about my Giants but I am also tired of all the disparaging comments in line by so-called Giants fans. Team fams can certainly be disappointed by the performance on the field but comments like treading the entire team are neither realistic or helpful. I've been a Giants fan for maybe 35 years and they have had some awesome years and some less impressive, but I am still a Giants fan.

The Grand kids cracked me up over Easter.  Participated in so many egg hunts I don't know how they kept up their energy. The younger tagged along behind her bigger sister and gladly took the cast-offs of big sister  (who doesn't care for chocolate or white chocolate).

So last night I had a dream that  I was visited by another poet. We drank wine, overindulged in pastries. Chatted with my wife. Listened to music and I must have taken my blood sugar three or four times in the dream. Talking shop might have been fun but we didn't do that.  I don't often have poets invited into my dreams for some reason but when it happens it is usually a delight. I confess usually there is something a bit eccentric that happens.

It seems that living in the now becomes harder with all the stuff in the world going on. It's not at all easy to do and not think about worldly problems.  I hope to immerse myself more into reading and writing in the week ahead.