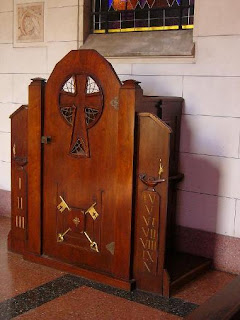 Dear Reader / Friend or both...

It's Tuesday night and it has been 28 days, One Truman Gala, On 35th Legislative Dist. Organizational Meeting, One full Democratic Committee Meeting, a 9the Election To The Democratic Committee, several rejection letters, 27 new poem drafts, 3 gas tank fill-ups (I think), and untold days of frustration since my last Confession.

I have gone from sceptical that the Democrats can hold onto the Senate in the fall elections to feeling relatively optimistic that we can gain 2 to 3 seats. I confess this is based on my general assessment of a variety of polls and not just wishful thinking.

I confess that I am at a loss for understanding how impotent the Republican Party has become so quickly in this country.

I confess that I have fallen off my schedule of working on my poetry manuscript. It is perhaps a combination of coming out of the Primary elections and starting back to school.

I am taking two classes this semester. I confess one is really interesting, the other I could teach. with both hands tied behind my back.

I confess that I have absolutely no idea where August has gone to.

I confess that Madison, my long-haired Dachshund had probably the best day of his life and I missed it. I am told he found a snake in the back yard and it became his favourite toy. Having missed it personally, I feel kind of like being told you weren't home and missed your son or daughter's first steps.

Mood Tonight: a mixture of #sadness, #frustration and #empathy