I've arrived home from Portland. AWP19 is history. It always seems like we run on pure adrenalin. It's like moving forward simply on the inertia that has been building and then, it all comes crashing down after it is over. I think this year was more emotional as it closed out than normal. I had a lot more commitments dictating my schedule and yet I feel it was one of the best.

There was a very big emphasis on the Writer to Writer program this year. We had the normal alumni reception. I spent time volunteering at the booth. We also did an on sight reading of published work by mentee alumni. Several of us talked about planning for future readings at upcoming conferences.  Then there was the Braver Together Gala - a fundraiser for W2W. I was later to it due to volunteer commitment, but it was just one more way the AWP mentorship program was putting itself out there.

One of the fun things about the conference is always the swag.  Who will have the best each year? 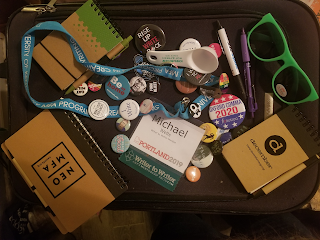 Always buttons. One of the most often commented on was the campaign like button for the OXFORD COMMA - 2020!  Actually, this button has been brought out in other years with only the year modified but  I got more comments about it.  Various tens, note pads, notebooks, funky sunglasses, a coffee measuring cup, Temporary Tattoos galore. 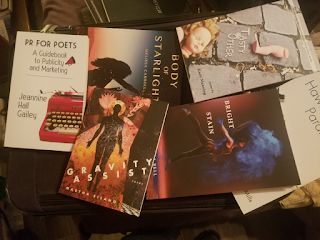 I added quite a few books to my library this year.

Elegy in the Passive Voice by Allen Braden

A Year of Silence by Polly Buckingham

Body of Starlight by Melissa Carroll

Tasty Other by Katie Manning and a whole host of Literary Reviews & Journals.

So this year I had a chance to meet some people IRL that  I've interacted with but never met face to face.  I learned that Kelli Russell Agodon is not just an enigma.

I met Katie Manning for the first time and got to hear her read at an off-site reading. Martha Silano was reading there as well, though I had already met her IRL.

Marianne Mersereau  AKA Wild Honey and I met for the first time and we attended the off-site reading mentioned above.

Saturday, Marianne was kind enough to come and support me as I read with  other  Writer to Writer alumni at the
Convention site.


There were some very well done panels.  I found Cheating on Poetry to be very informative. One of the presenters was Beth Ann Fennelly, whose writing I absolutely adore.

I had my first taste of yoga with Melissa Carroll. I am not especially bendy but I was able to hang in there. It felt good, after first being a bit painful. Something that  I believe I will benefit from. Both physically and in terms of meditating and freeing myself for better writing.

The most asked question from the conference, came the day I wore the shirt with the octopus riding the bike and holding an umbrella. And no, I have no idea what the significance the octopus has to Portland. 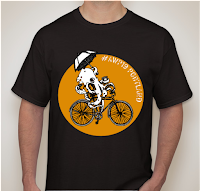