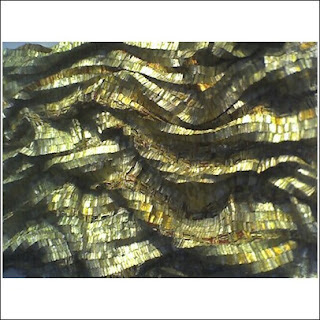 Wine anyone? At left is a snapshot of a portion of an art piece that was done the the top raps of wine bottles the cover the corks. A gripping piece of art work my daughter and I saw yesterday. When I first saw it from a distance I had no idea what the medium was but it locked on me like a heat seeking missile and we were inseparable at that point. I had to see it up close.
The brilliance reminded me of fools gold. Sort of chunky and multi layered in texture. I wanted to bring it home though it would have taken a massive wall to display it on.
We saw a number of exhibits - many old black and white photos - lot of them civil war era. I am continually impressed with what a talented photo artist can do with black and white.
There were some civil war battle photos. I was remarking to my wife how gory they were when Meghan (daughter) took issue with the gore description. And she was right. They were certainly not gory by cinema or even news standards today, but they were disturbing none the less in a very real way.
While there was not the blood and or mutilation we often equate with gore, many were battlefield shots taken the day after a battle. The stiff and sometimes bloated bodies would have configurations of limbs that suggested that many were left dying - scattered about the landscape perhaps for hours in pain, or one reaching for another nearby in life and frozen in that reach to their final ounce of remaining life was gone. It was perhaps more properly a morbidity than gore.
Today we took Meghan to Christopher Elbows Chocolate to celebrate her birthday. You want decadence? Try it. There is supposed to be one opening in San Francisco for you out west.
Posted by Michael A. Wells at 6:31 PM