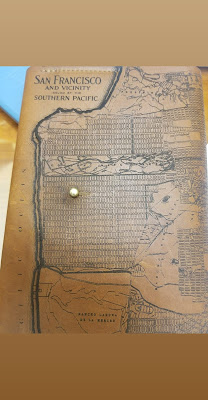 It's been two snow & ice storms, four poems submitted to one venue, plane tickets to AWP19 bought,  more presidential candidates announcing than I can remember, lots of reading and lots of writing since my last confession.

I mentioned in my last post my new leather Journal and promised a picture. It is etched with the Southern Pacific railway in the greater San Francisco area. Pretty Cool. This journal will be a companion to my other leather writing journal I have been carrying for years now.

I confess that I waited a bit too long to get plane tickets for Portland and as a result, I did not have good return trip choices. I will do better next time.

Going through another of those writing funks where I am not happy with much of what I put on a page. Of course, this is not the first time this has happened and I confess that I am well aware that it will happen again. I'm writing a lot trying to push through it. It's the only way I know to get back on track. Still, it is frustrating when this happens and you wonder if you will ever put another poem on a page that you are happy with.

Was anyone else appalled at Vice President Pence's lame, comparison of Donald Trump with Martin Luther King? Okay, I confess it was far more than lame. Honestly, it was sacrilege.

My thoughts and prayers go out to the many federal employees that are going without checks. Many, not only with no income but still driving to work every day to do the important things like keeping us safe in air travel, fighting crime, prosecuting criminals, protecting our shorelines and borders. I confess that it makes me angry that the Senate Majority Leader conflates his role with that of the Administration and will not allow for votes unless the president agrees with a particular measure. I confess I want to vote against McConnell a gazillion times. Unfortunately, he is not from my state and even one vote by me against him would be voter fraud.

Tomorrow is my weigh in at WW.  Last week I had dropped 12.4 lbs since I started. I Always feel like I am going to gain on the morning of the weigh-in. I confess that it's probably a paranoia thing more than anything else.

I am still morning the loss of Mary Oliver. Along that line,  I morbidly wonder what other poet greats we will lose this year. I saw a poet tweet from Kelli Russell Agodon this week that mentioned how it would be good to show more appreciation for our poets while they are living.  My reply tweet was, Amen!

Until next time, be safe and be of joy!