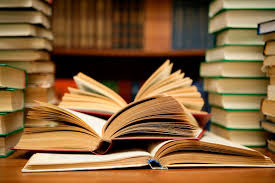 Federal workers have started back to work, Trump's poll numbers are in the tank, Roger Stone was taken into custody and indicted on seven counts, I'm still weighing my options on panels to attend at AWP19 and another week has passed since my last confession.

I confess that I don't speak Japanese.  I don't was that as a shortcoming.  I'd like to. And about  5 or six other languages. But the reason I mention Japanese in connection to the literal meaning of Tsundoku. I know the word is pronounced as though the T is silent and it is something like sun-do-ku.  I also know that it has to do with books. Lots of books. The ownership of perhaps more books than you can or do read. I'm a little uncertain if it is a noun or a verb but a cursory search on this point indicates it's used in both capacities.  Still, when it comes to translations, I hesitate to maintain this is correct, but I can tell you I have seen it used in both fashions.

According to Wikipedia, The term dates back to the late 1800’s – early 1900s. It combines elements of Japanese characters  for "pile up" and the character for "read"

Alfred Edward Newton, author and book collector (Not to be confused with Alfred E. Newman of Mad magazine fame)  is quoted as saying, "Even when reading is impossible, the presence of books acquired produces such an ecstasy that the buying of more books than one can read is nothing less than the soul reaching towards infinity ... we cherish books even if unread, their mere presence exudes comfort, their ready access reassurance."  In this context, Tsundoku appears to be a positive thing. Alternatively, I have heard it used to describe book hoarding. The latter is a less flattering description of the pastime.

Let me say that  I am guilty of having more books that I have read. Or at least completed. I have a fairly extensive personal library. I make no bones about it.

Maybe one of the reasons having so many books is not a problem for me is the fact that I have so many friends that likewise have extensive book collections. It also gives me that hope of finding something in each one of them that at some point will be remarkable and worth the wait to find it.

I don't have a count of the number of books I have but three walls of my study have bookcases full. I generally will have some beside my bed on another bookcase.

I recognize the word hoarder is in fact often associated with mental illness. One of the behavioral disorders and not psychosis. I'm a writer, after all, isn't it a given that I will be a little off the wall?

According to statistician Nassim Nicholas Taleb, unread volumes represent what he calls an "antilibrary," and he believes our antilibraries aren't signs of intellectual failings, but the opposite.

Alberto Manguel puts it very lovingly - “I have no feelings of guilt regarding the books I have not read and perhaps will never read; I know that my books have unlimited patience. They will wait for me till the end of my days.”  There may come a day in which I am no longer able to add books to my library. I hope that is not the case, But I keep reading. And yes, buying. For the time being


Until next time, be safe and of great joy. And read a little each day. Write too!

P.S.  I'd love to know your thoughts on piles or shelves of books still waiting to be read.

The Value Of Owning More Books Than You Can Read

All Those Books You Bought But Haven't Read

Email ThisBlogThis!Share to TwitterShare to FacebookShare to Pinterest
Labels: Books, Confession Tuesday, more books than you have read, reading, Tsundoku