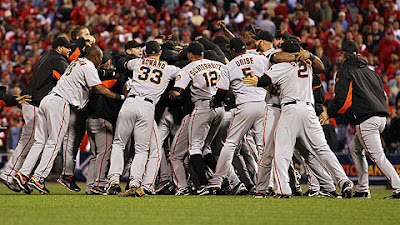 This team of unlikelies is far from some of the power teams the Giants have put together in the past.  It won so many games by 1 and 2 run margins that many have called Giants baseball this season Torture Ball.

The team only remotely resembles the team that broke camp at the end of spring training. Players have been shifted around the field and others acquired as the season went on. Players like Pat Burrell who was cut from another team mid season and thought he would be watching the rest of the season from home, but the Giants were interested and he became a great fit and was one of many players that kept the team competitive down the stretch.

These players have played their hearts out to get to this point and it would be so incredible to see them win it all in the World Series. I've cheered the Giants through the 1989 Quake Series they lost to Oakland and the 2002 California Series vs Anaheim that they heartbreakingly lost in game 7.  I'm ready for a Giants World Series Championship team!
Posted by Michael A. Wells at 11:54 PM