Kansas City at the Crossroads of Cultural Growth 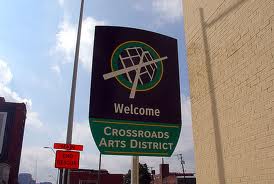 In Kansas City, Missouri the Crossroads Art District has transformed vacated light business manufacturing structures into a thriving area. To the south of the Power & Light Entertainment area it offers yet another reason for people to go downtown at night rather then workers flee the business area for the suburbs come 5 p.m.

One of the  successes of Crossroads has been to stabilize an otherwise declining or at best stagnate part of the city. This has not happened overnight but has grown and in some respects once might consider that it has been enough of a success that for the new artist seeking a place to hang his or her hat & art, the options available may be tougher to find.  This has been the case in many other successful urban areas who have sought to revitalize areas by attracting the Bohemian demographic.

Such urban planning in many big cities began several decades ago. For Kansas City, the growth began perhaps less then ten years ago. This year however, the completion of our new center for preforming arts nearby is like icing a cake.

A New York Times piece by Elizabeth Curric-Halkett,  Where Do Bohemians Come From?  discusses the phenomenon of cities getting into the act of job creation in the arts. Currie-Halkett who is an assistant professor of urban planning acknowledges the success takes more than grants and tax breaks to make an art community that thrives. The Crossroads area in Kansas City had a lot of the kinds of structures that she insists are necessary for the success of such ventures, like oversized buildings, oversized doorways, lots of concrete flooring.

I am well aware that the neighboring state of Kansas has battled Governor Brownback over funding for the Kansas Arts Commission. These are not easy economic times for any industry and people often look at the arts as one of the first places to cut. Going clear back to my days in school the music and other art departments were constantly fighting to maintain levels of funding much less come under the knife.

There is this common portrayal of art as something for the rich. A frivolity that is not needed by most and therefore of less importance. Actually it is times like these when I feel that art has the most to offer. It is the distraction so many need from unemployment, foreclosures and food pantries.  Art is a human experiance and is most importamt at those junctures where humanity is most threatened.

I hope we see more successful art districts spring up throughout the country in the next couple of years and I sincerely hope that people everywhere get to experiance the art they deserve.

I couldn't agree with you more!